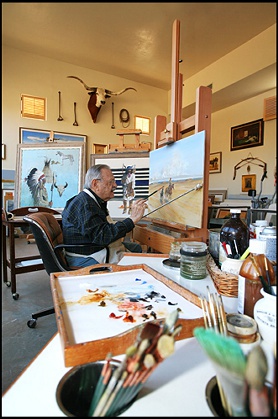 Reginald Jones specialized in Western Americana, horses and wildlife. His paintings have a fresh perspective of country and western life. They capture its mood and its character.

Born in Shreveport, Louisiana, he had been drawing and painting since childhood. We know from a small drawing he did dated Nov. 8, 1935 he was an artist already, and it’s believed this was the moment he chose to be neat the rest of his life.  The note from the teacher read “very good, but untidy.”  He never had an untidy moment again.

His early training in fine art and design was at Louisiana State University while still in high school and was followed by studies at the American Academy of Art and the famed Chicago Art Institute.

Reg was drafted in to the US Army during the Korean War and was stationed at the Presidio in San Francisco where he refined his craft as an artist and graphics designer.  Even in the Army he was an artist.

In the late 50’s he started his graphics company Unigraphics in San Francisco.  He handled advertisement, logo design, and corporate annual reports for fortune 500 companies.  He even did the first annual report for Apple.  In the 70’s they moved from Bay Area to the Napa Valley.

Reginald's thirty years of experience in graphic design with its demanding needs had provided the background for his pursuit of creative art. His knowledge of horses comes from 'hands-on' experience. A lifetime of loving and raising horses, buying and selling them had enabled him to paint the horse so masterfully.

Reginald and his wife, Alice retired in Tucson, Arizona and he had been painting the American West until his death in May of 2017.